Desktop application are being closely integrated with the web. With Adobe integrated Runtime (AIR) it is possible to surf the web, play videos, and even make Net calls from within the application itself, sans a browser. 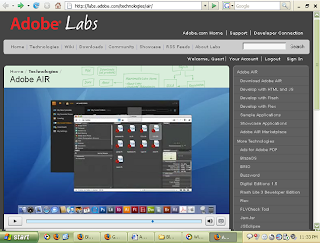 Web 2.0 a new way for the end-users and web developers to use the web. In this second-generation web, the desktop will be closely integrated with the web. This integration will be so tight that a user will not even be conscious about it. For instance, one will not be able to discern whether the media player is playing songs from Internet or from his local hard disk.
Until now, this is kind of integration was not possible, because no web 2.0 service works without a browser like Internet Explorer or Firefox. Even widget are dependent on some core application operation system functions. But Adobe claims to have broken free from the web browser and OS shackles with its Adobe Integrated Runtime (AIR). AIR works much like a web browser by fetching data directly from database on a web server. It communicates with its own file system. This runtime shows that applications can bypass the web browser.
AIR is really a cross-operating system runtime. It lets developers use their skills in HTML, AJAX, Flash and Flex to build and deploy rich Internet applications to the desktop.

Air is Free to use and one can download the framework from Adobe's labs website. Once installed, you can sample all the AIR tools, which are readily available on the same site; all tools are freeware! The installation of the tool is tool is smooth, because unlike Windows applications, AIR programs do not populate the registry, and do not use Windows DLL libraries. So you have cleaner system even after you uninstall it.
You can start the installation of the runtime by double clicking on the appropriate installer file. All program files are available in a compressed form, similar to ZIP archive. The installer simply copies the files for the selected programs. Once installed, you can start the runtime by double-clicking its icon on the desktop.

The Verdict
The concept of AIR points to the future and can take the Idea of web 2.0 a step forward. Finetune is a good example. Thanks to AIR, web radio no longer runs from website; it is on your desktop! You can see more examples on Adobe's Labs site, use "labs adobe air" keyword to search in Google.
But how many programmers are interested? A few have mastered traditional language like C and C++. Literally nothing works in AIR without Action script by flash. One does not need to AIR to create Flash-like advertisement banners, mainly used for commercial purpose. Enthusiasts who have a good idea about Web 2.0, and who want to implement it for the desktop, may be interested. In future, we are likely to see a blend of functions in AIR and silver light.
There will be web tools without browsers, written in the traditional codes.
← Newer Post Older Post → Home