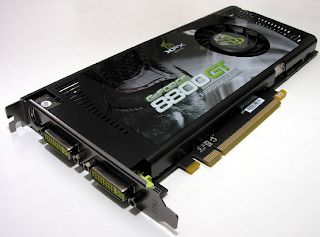 GeForce 8800 GT
The first factory-over clocked GeForce 8800 GT that made it our Test Center was XFX GeForce 8800 GT Alpha Dog Edition, with a surprise bonus - full version of the game company of Heroes is bundled! Let's find out and see how attractive this deal is.

Features: Its suffix does sound whacky enough to lure gamers. The Alpha Dog Edition is nothing but the stock GeForce 8800 GT with over clocked core and memory - XFX has stepped up the core and memory speed by 70 MHz and 75 MHz respectively. That's 11.67 percent increase in core speed.
Before getting the card in our hands, we expected it to have better cooling system with a bigger heat sink and fan. However, despite over clocked core and memory, the design of the card is exactly the same as the regular 8800 GT. The only difference is the sticker on the heat sink bears the name of the card along with the picture on the packaging. Let's head to the scores to find out the gain in performance over the stock 8800 GT.
Performance: While 3DMark 06 showed and improvement of 7 percent in performance, the difference in frame rates was hardly a few frames. With game setting set to high, Call of Juarez ran only 2 fps faster.
We found a good jump in performance only in Crysis running at 1280x1024 with medium settings. For such a mediocre improvement, it would seem that this card is not such a good deal. If it had not included Company of Heroes, we would have balked at paying anything more than a few hundred rupees for the performance boost over a regular 800 GT.

Here's a little secret - if you're familiar with over clocking graphics cards, you can homebrew this version of 8800 GT by tweaking the core and memory speeds of the regular 800 GT. IN that case, though you bear the risks of over clocking and damaging your components.
VERDICT: A good attempt by XFX - however it would have been better with higher core speed and improved cooling system.
Advantange - Completely beat the mammoth GeForce 8800 GTX , 768 MB
Disadvantage - Heats up enough to warm a cup of water. Make sure your case is fitted with sufficient number of cooling fans.