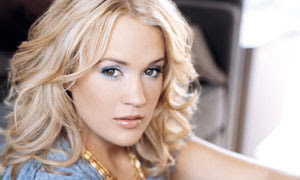 Carrie Marie Underwood (born March 10, 1983) is an American pop country music singer-songwriter who won the fourth season of American Idol. Since then, she has become a multi-platinum selling recording artist. Her debut album, Some Hearts, was certified 7x platinum and is the fastest selling debut country album in Nielsen SoundScan history. Her debut album, Some Hearts, has yielded five #1 hits on the country charts in the United States and Canada: "Inside Your Heaven," "Jesus, Take the Wheel", "Don't Forget to Remember Me", "Wasted," and her biggest hit to date, "Before He Cheats." In addition, Underwood scored another Top 10 Billboard hit with her charity single, "I'll Stand by You." Some Hearts sold a total of 7 million Recording Industry Association of America-certified copies as of February 2008, in addition to being the best selling album by an American Idol contestant to date, it is also the best-selling solo female debut album in country music history.

Her second album, Carnival Ride (which is certified 2x Platinum by the RIAA) was released on October 23, 2007. It has so far sold over 2 million copies[3] and has produced two #1 country hits, "So Small." and "All-American Girl", "All-American Girl" currently sitting at #1 on the Billboard Country chart. Underwood's Christmas single, "Do You Hear What I Hear?" peaked at #2 on the Billboard Adult Contemporary charts.
Aside from her vocals, Underwood's success is attributed to what many fans recognize as her wholesome image. In general, many of her songs also present inspirational and uplifting themes and messages. To date, Underwood has sold over 11 million copies worldwide in the last two years.

The first country American Idol, Carrie Underwood grew up in the small town of Checotah, OK, and began singing with her church at the tender age of three. Throughout her childhood, she also performed at functions for the Lion's Club and Old Settlers Day, and eventually at festivals in several states. Along with developing her singing, Underwood learned to play guitar and piano. She graduated from high school as her class salutatorian and majored in mass communication at Northeastern State College with an eye on a career in broadcast journalism, but continued her singing career throughout her studies.

As a senior just a few credits short of her degree, Underwood heard about the auditions for the 2005 season of American Idol. She tried out for the show at the St. Louis, MO, auditions, and her innocent charm and pure, pretty voice ended up winning her not only a place among the 12 finalists, but the title of 2005's American Idol. Her debut single, Inside Your Heaven, was released that summer, and along with appearing on the American Idols Live! tour, and picking up endorsement deals with Hershey's and Skechers, she began recording her debut album in Nashville. Some Hearts was released late that fall and was a smash hit, selling over 300,000 copies in its first week and eventually going triple platinum. The album's lead single, "Jesus, Take the Wheel," was also a big success, topping Billboard's Hot Country Songs chart for six weeks.

Acclaim for the album and single spilled over into 2006, when Some Hearts re-entered Billboard's Top Ten after Underwood's appearance on the 2006 American Idol finale and "Jesus, Take the Wheel" won Single Record of the Year at the Academy of Country Music Awards (where she also won Top Female Vocalist); a Dove Award from the Gospel Music Association; and Breakthrough Video and Best Female Video at the CMT Awards, making her the only double winner at the event. Despite her hectic career as a country music star -- which included carrying her Some Hearts tour through the fall of 2006 -- Underwood found the time to finish her degree and become a spokesperson for People for the Ethical Treatment of Animals (who named her 2005's World's Sexiest Vegetarian). "Before He Cheats" was released as Underwood's third single late in 2006, and became her third country number one and her fourth total number one hit. That December, she won five Billboard Music Awards: Album of the Year, Top 200 Female Artist of the Year, Female Country Artist, New Country Artist, and Country Album of the Year.

Early in 2007, Underwood began work on her second album, while "Wasted" became the fourth single taken from Some Hearts; she performed it on an episode of American Idol that March, and the following month, it hit number one on the Hot Country Songs Chart. She returned to American Idol in April as part of the show's "Idol Gives Back" benefit episode: Underwood visited South Africa and recorded an acoustic cover of the Pretenders' "I'll Stand by You," which was released exclusively on iTunes. Underwood won three awards at the 2007 CMT Awards: Video of the Year, Female Video of the Year, and Video Director of the Year for the video for "Before He Cheats." She also took home three 2007 ACM Awards in May, which included Album of the Year for Some Hearts and Top Female Vocalist. She made a third trip to American Idol late in the month for the sixth season finale, where she sang "I'll Stand by You" to a standing ovation. During the show, Clive Davis recognized Underwood's sextuple-platinum sales; Underwood was the first country artist to sell that many copies of a debut album since LeAnn Rimes' Blue in 1996. She also appeared on Brad Paisley's album 5th Gear, which was released in June 2006. ~ Heather Phares, All Music Guide
← Newer Post Older Post → Home