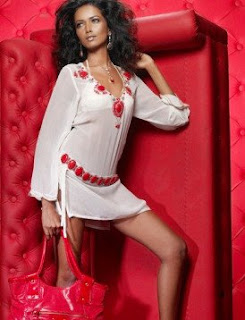 In college, Garima Parnami used to fantasise a lot about walking on the ramp, but she never thought this particular dream would come true. The model from Delhi who is said to be the hot new face of 2009.
Although the 24 year-old Garima Parnami began modeling almost two years ago and her first assignment was walking the ramp for designer Arjun Saluja. Year 2008 is most memorable for Garima Parnami. That's when she featured twice as the cover girl for a fashion magazine and also received rave reviews during fashion week.
"I think being on the Marie Claire cover, along with the work I did for Vogue did the trick. Suddenly, people began recognising me. At the next fashion week, I think I must have walked the ramp for almost all the good designers." Garima Parnami says.
Still, being chosen as the most promising female model by well known choreographers is special.
It means a lot to get this kind of appreciation from bigwigs in the industry, "says Garima Parnami candidly, adding, "When you start modeling, you are nobody and you have to work hard to prove yourself. So any appreciation really means a lot. I am really very grateful to everyone who's had faith in me."
Ask her about most models' next ambition, and Garima Parnami replies, "I have never done any commercials and don't even think of Bollywood or TV. To be honest, my real goal is to work abroad as a model."
... Garima Parnami
← Newer Post Older Post → Home