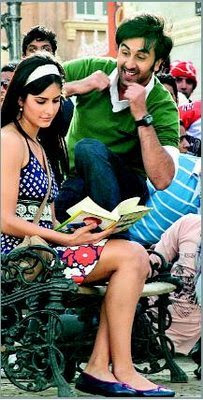 Ranbir Kapoor and Katrina Kaif had a tough time on the sets of Rajkumar Santoshi’s Ajab Prem Ki Ghajab Kahani, which also stars Salman Khan in a cameo. Trouble started when Ranbir and Katrina found it difficult to perform a few complex dance steps by choreographer Ahmed for the song Follow me.

Both Ranbir and Katrina asked Ahmed to change the steps, but Ahmed stood his ground. Director Santoshi didn’t interfere. A source on the sets said, “While Ranbir was not getting a large part of his steps right, Katrina had trouble with a few steps given to her. Although Ranbir and Katrina put in a lot of effort, they failed to follow the instructions.”

“To be fair, the steps were not at all easy as the song is a fast one,” our source added.Ahmed confirmed the story and said, “I didn’t want to change a single move. Rap songs primarily have close-up shots but this song mostly has long shots.”

Ahmed isn’t the first choreographer to have differences with actors. Fortunately, after practice over three long days, Ranbir and Katrina eventually got their steps right. Ahmed said, “Finally, Ranbir and Katrina came out with flying colours. You will see the results on-screen
← Newer Post Older Post → Home