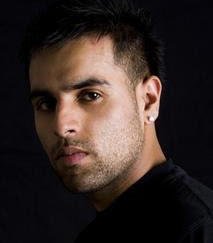 Indian music is rising to a new realm in the hands of UK based Bhangra artist H-Dhami. The blend of his western and Punjabi music to promote his special style of Bhangra has already won the hearts of music lovers. After performing in different parts of India, H-Dhami is now focusing his attention in India.
Born as the sun of legendary singer Palvinder Dhami, music is there in the blood of H-Dhami. He grew up listening to the music of his father's Bhangra band 'HEERA.' He started performing on the stage since the age of six alongside his dad. He draw inspiration from music from Gurdasman ji for folk, Kuldeep Manakh to Jazzy B, Michael Jackson, Timberline, Justin Tibmberlake and Jay Sean. As he grew older, he concentrated in his mother music and wrapped it in the world music.
"Within just one year H-Dhami has won applause from many realms."
Tradition and culture are vital to the music of H-Dhami. He always feels that Punjabi music has a universal appeal and Bhangra is enjoyed in all part of the world. Any person whether they belong to any background listens to this music.
Within just one year H-Dhami has won applause from many realms. His video, "Sadke Java" has been nominated as Video of 2007 by Zee TV. He has already received two nominations for the 2008 UK Asian Music Awards for Best Newcomer and Best Male Actor. He also ventured into Bollywood by making a debut in an animated flick Toonpur-Superhero.
Now, let us wait for H-Dhami's lively and energetic performances that have set to rock India.
← Newer Post Older Post → Home